In spite of greater knowledge about – and evidence of – the intersections between HIV, gender inequality and violence against women and girls, programming has not yet reached the scale, depth or breadth required to reverse the epidemics of gender-based violence and of HIV or effectively integrate men and boys in efforts to challenge and change harmful gender norms.

This meeting formed part of growing efforts to address the intersections of gender and HIV and AIDS, including: addressing the HIV needs of women and girls, enhancing efforts to integrate a focus on violence against women and its relationship to HIV vulnerability into HIV and AIDS responses, and actively engaging men and boys in achieving gender equality and in challenging the constructions of masculinities that exacerbate the spread and impact of HIV and AIDS, with an array of countries presenting their current efforts of addressing this. 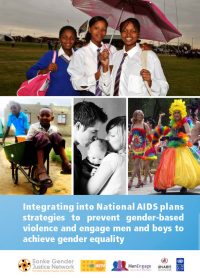