FGM is more than just a cultural practice with adverse health consequences, but it is an issue of concern for women’s Sexual and Reproductive Health and Rights (SRHR). UNFPA has identified severe pain, shock, haemorrhage, tetanus or infection, urine retention, ulceration of the genital region and injury to adjacent tissue, wound infection, urinary infection, fever, and septicaemia as the immediate complications of FGM. The haemorrhage and infection is often severe and could cause death. The long-term consequences include complications during childbirth, anaemia, the formation of cysts and abscesses, keloid scar formation, damage to the urethra resulting in urinary incontinence, dyspareunia (painful sexual intercourse), sexual dysfunction, hypersensitivity of the genital area and increased risk of HIV transmission, as well as psychological effects.

The harmful effects of FGM have been recognized globally through international frameworks, such as the Convention on the Right of the Child (1990), the International Conference for Population and Development (ICPD) in Cairo 1994 and the Declaration and Platform for Action of the Fourth World Conference on Women (FWCW), Beijing 1995. The Programme of Action of the ICPD (1994) defined FGM as a harmful practice and a form of violation against women and girls’ basic rights aimed at controlling their sexuality and a major lifelong risk to women’s health. The Convention urges governments and communities to urgently take steps to stop the practice and to protect women and girls from all such similar unnecessary and dangerous practices. Regional instruments such as the Maputo Protocol, Article 5 lists FGM as a harmful practice and calls for targeted support and creation of awareness to the public on its harmful effects. Similarly, Agenda 2063 aspires to end all social and cultural harmful practices such as FGM through national and continental efforts, which include the passing of national legislation on such forms of violence and strategies to protect women and girls in conflict. Similarly, the African Union (AU) led Saleema initiative also seeks to galvanize political action to enforce strong legislation, increase allocation of financial resources and strengthen partnerships to end FGM by 2063.

It is therefore incumbent upon the Men Engage Africa (MEA) to assume a proactive and collaborative role in ensuring substantive legal and social equality for women and girls generally and contribute to the elimination of FGM in particular. MEA’s FGM Policy Advocacy programme seeks to identify, analyse and locate laws and policies in relation to women and girls’ experiences premised on the understanding that gender is both ignored and enshrined in legal theory and practice. The programme/ campaign systematically uses public policy and law as vehicles for social change and is constantly finding innovative methods of harnessing these in a positive way to improve the lives of women and girls. This strategy document sets out the motivation, imperatives and entry points for engaging in national, regional and international advocacy initiatives and articulates the necessary actions and available opportunities at these levels for effecting change. 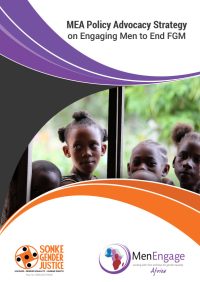