MenEngage Africa (MEA) – which was formed out of a global initiative, the MenEngage Alliance, in 2008 – has grown from its base in the Southern African Development Community (SADC) region to Central and East Africa and now into the Francophone West African countries. To date, the network is operating in 22 countries – with sub grants being provided to partners in 10 focus countries – and requests to expand the network even further continue to be received.

The MEA programme seeks to increase gender equality and improve sexual and reproductive sexual health of both men and women in Sub-Saharan Africa by engaging men and boys to transform gender norms, in uence policies and promote human rights and accountability. 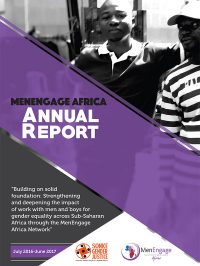