MenEngage Africa: Increasing the Scale and Impact of Work with Men and Boys for Gender Equality across Sub-Saharan Africa through the MenEngage Network

Sonke, through the MenEngage Africa alliance, implemented the project to strengthen work with men and boys for gender equality in the region for three years from 2011 to 2014. In 2011 when the project was initiated, it sought to address the gap that existed between advances made in providing responses to gender-based violence, and interventions that were aimed at preventing violence and addressing underlying causes such as rigid gender norms. The project acknowledged the fact that despite gains made in improving gender equality, gender inequality continued to undermine democracy, impede development and compromise people’s lives. There was evidence showing that contemporary gender roles, and especially rigid notions of manhood, contribute to gender-based violence, sexual exploitation and abuse, and exacerbated the spread and impact of HIV and AIDS.

This report provides detailed lessons learned over the three-year project implementation period and highlights some of the unintended results and risks from which lessons for future work are able to be drawn. Unlike the annual project updates, this report will not focus on specific activities implemented over the three years. It will rather focus on high level results that we have been able to achieve and the change that the project has effected within the network and in the region as a whole. 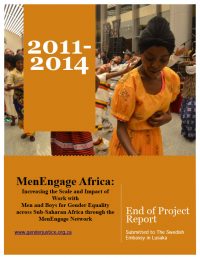