With the aim of effectively scaling-up work with men and boys to promote gender equality, prevent gender-based violence (GBV) and the sexual exploitation of children, and reduce the spread and impact of HIV and AIDS across Sub-Saharan Africa, Sonke on behalf of the MenEngage Africa network, coordinates this Sida-funded project in order to work towards achieving the following objectives:

This report provides an overview of the achievements and challenges faced in working towards these objectives across the period from April 2011 – July 2012. 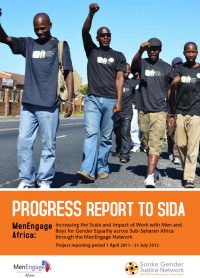