The 59th session of the Commission on the Status of Women took place from 9-20 March 2015. It was a historical session as it commemorated the 20th anniversary of the 4th World Conference on Women in Beijing, which marked the adoption of the Beijing Declaration and Platform for Action. MenEngage was well represented through the activities of the members of the alliance and the global secretariat. This CSW has been a landmark moment for building up the MenEngage movement.

Moreover it was encouraging to see the broad support voiced at this CSW for engaging men and boys. Many women and men supported this as an important piece of the puzzle to achieve gender equality – for women and girls, but also for men and boys themselves. And often it was expressed that gender equality is for all genders – it is a matter of humanity.

This report provides a summary on 1) the results of the CSW; 2) attention on working with men and boys on gender justice; and 3) events and joint advocacy activities by the MenEngage Alliance. 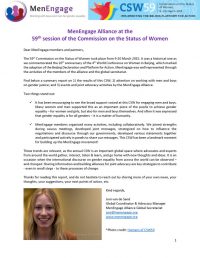