Towards safety and equality for women and girls

Central to the concept of gender are the notions of power, decision-making, control and ownership. Historically, gender relations have always been grossly unequal, often to the extent that women are reduced to second-class citizens or even harmed or killed on the basis of their gender.

The initial part of this study, divided into three chapters, draws on baseline surveys carried out in Kenya, Rwanda and Sierra Leone respectively. Conducted by partner organizations of Sonke Gender Justice (as well as the United Nations Trust Fund), they employ different methodologies to derive both quantitative and qualitative findings.

What follows thereafter is a comparative analysis of these findings, a section which consolidates the earlier information in an attempt to add valuable new perspectives to our understanding of gender inequality, GBV, and the many complex factors which perpetuate them. 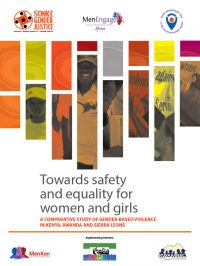