The 59th Commission on the Status of Women took place from 9-20 March 2015. It was a historical one as we commemorated the 20th anniversary of the 4th World Conference on Women in Beijing, which marked the adoption of the Beijing Declaration and Platform for Action. MenEngage was well represented through the activities of the […]

New Delhi: Global efforts to attain gender equality will remain unfulfilled unless men and boys become more fully engaged in the process, is one of the key messages emerging from a major international conference being held in New Delhi this week. The Symposium is timely, as it concerns a number of issues that have recently […]

Dean Peacock is an Ashoka Fellow Sonke is excited to announce the selection of Executive Director Dean Peacock to the prestigious Ashoka Fellowship. The Ashoka award is a prestigious award made to just 8 people in South Africa in 2013 and recognises leading social entrepreneurs who have innovative solutions to social problems and the potential […]

Each year the United Nations Commission on the Status of Women meets at UN headquarters in New York to review progress against commitments made in international agreements and national law to advance women’s rights. This year the 57th CSW focuses on the prevention of all forms of violence against women and girls. Sonke Gender Justice […]

An article by Sonke Director Dean Peacock has been featured on the Women’s International League for Peace and Freedom’s 16 Days blog. The blog features one article every day in the 16 Days of Activism for No Violence Against Women and Children. This piece, on the inspiring work that MenEngage partners have done to mobilise men in […]

In September 2012, Sonke established a small office in Geneva which will focus on global advocacy, fundraising and training of key international partners, including especially UN agencies and international NGOs. We have every expectation that this will increase Sonke’s profile and influence and deepen the impact of our work. We will evaluate its effectiveness regularly […]

Introduction I would like to start by thanking the Vienna Institute for International Dialogue and Cooperation for the invitation to speak at this seminar on men, masculinities, and violence in conflict and post-conflict settings. It is a tremendous honour to be able to share this panel with such distinguished speakers in a city with such […]

In June 2011, Sonke published the MenEngage Africa Network Regional Organisational Capacity Audit report. The audit contains findings that will inform future capacity building interventions across the MenEngage Africa Network to promote work with men and boys for gender equality throughout the continent. “This document provides an exciting roadmap to advance the collective work for […] 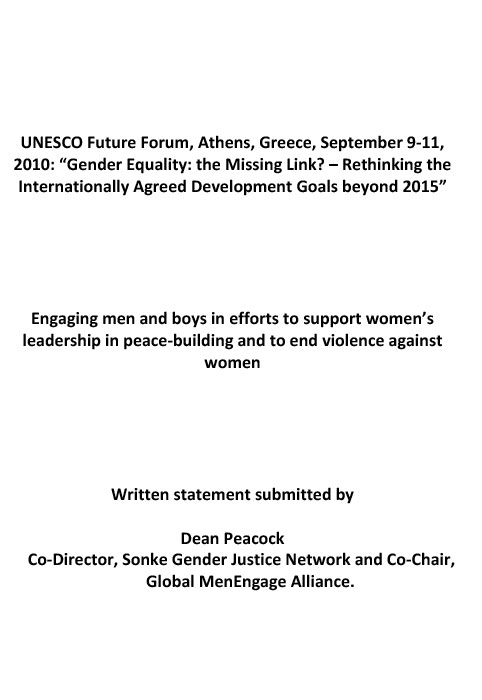 This speech by Dean Peacock at the UNESCO Forum focuses on how best to strengthen men’s support for women’s leadership in peace-building, and more generally how to involve men and boys in achieving gender equality and preventing domestic and sexual violence. This is informed based on the work Peacock does at both Sonke Gender Justice […]

INTERNATIONAL AIDS CONFERENCE: Sonke Director, Dean Peacock, presented at the 17th International AIDS Conference in Vienna on male involvement in the prevention of mother-to-child transmission (PMTCT) of HIV. He was joined by colleague, Patrick Godana, who presented on Fatherhood. SAB CAMPAIGN RETRACTED: Sonke and civil society partners have forced SAB to retract their “Grootman vs […]

Sonke at the 2010 UN Commission on the Status of Women

This year, Sonke (represented by Dean Peacock and Bafana Khumalo) again participated in the United Nations 54th session of the Commission on the Status of Women (CSW) held from 1-12 March 2010, in New York. From the launch of our report on SA’s progress, to our participation in high level panel discussions and presentations, Sonke […]