MenEngage Nigeria participants at the Do-No-Harm Conference, which was held in Abuja on November 28–29, 2022 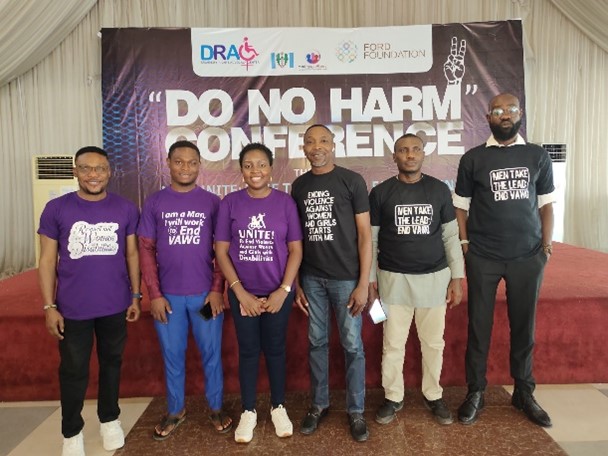 The two-day “Do No Harm Conference,” with the theme “Men Unite: Take the Lead to End Violence Against All Women and Girls,” was held on November 28 and 29, 2022, in AES Luxury Apartments and Suites, Jabi, Abuja.

The conference took a deliberate swipe at the growing issues of Sexual Gender Based Violence (SGBV), with a particular focus on securing men and boys’ cooperation to end sexual and all forms of violence against women and girls, particularly violence against people with disabilities.

People with disabilities (PWDS) are often socially excluded, have limited mobility, lack support structures, face communication barriers, and are negatively perceived by society. These forms of discrimination when combined with patriarchal attitudes towards women and girls with disabilities put them at an increased risk of violence.

Mr. Emmanuel Gabari of MenEngage Nigeria participated in a panel discussion on ‘Underreporting of SGBV cases, barriers and solutions’ from an organizational perspective. He explained the structure of MenEngage Africa and the MenEngage Nigeria, with details on the collaborations, partnerships and activities carried out by the latter in the six geopolitical zones of Nigeria.

“Working with men and boys to make sure that violence against women and children ends in our life time is imperative”, says Mr. Emmanuel Gabari

Societal attitudes towards WGWD are barriers to ending SGBV, as many people believe that WGWD do not have intimate partners or are seen as asexual and undesirable and therefore are not expected to have any form of sexual relationship.

The event also discussed consent, its literal meaning, and how African men particularly Nigerian men misunderstand it. There is a notion that if the woman refuses, the man should keep trying until she says yes, according to one speaker.

Nigerian women are generally disadvantaged due to the patriarchal nature of Nigerian society, which views women as weak and second-class citizens. To achieve a developed and violence-free world, it is critical to continue fighting systems that oppress women and girls.