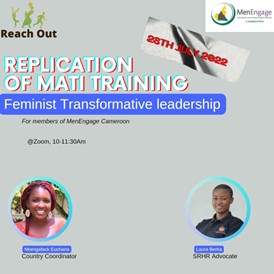 Following the MATI Training on Feminist Transformative Leadership for Social and Structural Drivers in Kampala, Uganda in April 2022, members of MenEngage Cameroon took part in a replication of the training on July 28, 2022. Nkengafack Eucharia, the country coordinator for MenEngage Cameroon, and Laura Berka, an advocate for SRHR who was present in person, facilitated this online training.

Similar to the training that was conducted in Uganda, this replication placed a stronger emphasis on feminist leadership that challenges the established power structures that have restricted women and girl from participating fully in the development of the society. Furthermore, it also took into account the preferences and viewpoints of the vast majority of the society’s poor and marginalised people, most of whom are women.

The training also explored the importance of sexual reproductive rights and engaged structural drivers, which are mostly religious and traditional leaders in many African communities.

In many African communities, pre-marital sex or sex education is frowned upon, so young, single individuals—especially young women—are not expected to engage in sexual activity. According to conservative religion and traditions, young people are expected to abstain from sexual intercourse until they get married.

However, the truth is that young people engage in sexual activity, some of them even having multiple partners. Consequently, training is important. Along with promoting gender equality, reproductive health rights (SRHR), diversity, and transformative leadership, this training also emphasised the importance of involving men and boys more in these causes.

“The replication of the MATI training for members of MEA Cameroon helps to strengthen our understanding of feminist work in communities. It gives us an opportunity to learn better ways of mainstreaming the MenEngage theme in the work we do. After participating in the MATI training in Uganda and implementing it in my country’s network, I look forward to organising other sessions in collaboration with members of MenEngage at the regional level. This would serve as an opportunity for sharing and learning of best practises that promote gender justice,” said Nkengafack Eucharia, Country Coordinator, MenEngage Cameroon.

“I learned from the MATI training that it’s important to engage men and boys in promoting gender equality to improve women’s reproductive health and rights. Also, this will support the shift of social norms, which will change behaviours and break gender stereotypes that prevent women from reaching their full potential’, Eka Zillian, MEA Cameroon youth steering committee member.

The participants made a commitment to continue being more duty-conscious and acting as change agents in their communities after the training.