I call upon men to go for voluntary HIV counselling and testing. If you find you are HIV-positive, take HIV treatment. It will not cure you, but when the virus is suppressed, you prolong your life. And you will not infect other people. This is something that must be done.

The Uganda AIDS Commission indicates that HIV prevalence among men is 4.3 percent. Although this is slightly lower than that of women at 7.5 percent, men are dying more from AIDS-related deaths accounting for 53.4 percent of the total deaths. The men known to be HIV positive and not yet initiated on Anti- retroviral Therapy are 48 percent. Men who do not know their HIV status stand at 45 percent! This situation is attributed to poor health-seeking behavior among men, therefore affecting their access to HIV testing, prevention, and treatment services. These poor health-seeking and health-preventative practices among men are commonly associated with toxic masculinity. Toxic masculinity creates a fundamental barrier and negatively influences men’s willingness to use HIV and AIDS-related services, thereby increasing men’s’ vulnerability to HIV and AIDS.

Having multiple and concurrent as well as cross-generational sexual partners, as a sign of masculinity, serves as channels of unchecked and continued new HIV infections in the general population. Understanding how to positively deal with masculinity among adult men and adolescent boys will help to promote men’s sense of responsibility and constructive engagement towards HIV prevention thereby contributing to ending HIV and AIDS by 2030.

The core of this guide is to promote understanding of “masculinity” as a social construct, its implications of the HIV epidemic and the role of men as actors in the HIV response. It takes on an approach that involves males in participating in the HIV response, through redefining what it means to be a man as desired for effective behaviour change. Working with men as significant partners in the HIV response will positively influence men’s decision-making power in the control of the AIDS epidemic.

Uganda has made significant progress in reducing HIV incidence (the number of new infections), prevalence (the total number of infections) and AIDS related deaths. There are approximately 1,400,000 People Living with HIV and 1,200,000 of these are on treatment; 51,007 new HIV infections and 19,500 HIV related deaths occurred in 2020.

However, new HIV infections remain unacceptably high as well as being gendered. According to the Uganda Population HIV Impact Assessment study done by Ministry of Health (UPHIA 2016), HIV prevalence was higher among women at 6.8% and 4.2% for men. 2.8% among young women and 1.1% among young men. Amongst older adolescents and young people, prevalence is almost four times higher among females than males. Among older men, HIV prevalence is highest in men aged 45-49 years at 14%. The prevalence was higher in the urban areas at 7.1% compared to the rural areas at 5.5%.

At the heart of the gendered pattern is gender inequality. The perceived low status of women and girls by society puts them in a weaker position to negotiate for safer sex. Many young women continue to lack economic resources that would empower them to make informed choices and negotiate favorably for safer sex.

Fear of domestic violence leads many women in relationships to keep quiet about condom use, HIV testing and other related matters. Women continue to face significant levels of stigma if they are known or suspected to have HIV, or if they get out of a marriage even if it is for their safety.

Norms of masculinity drive men to have multiple sexual partners, refuse to use condoms or adopt other protective measures including access to and utilization of HIV preventive services.

The first pillar of the Presidential Fast Track Initiative (PFTI) to End AIDS as a public health threat in Uganda by 2030 is engaging men in HIV prevention and closing the tap on new infections particularly among adolescent girls and young women. Men are heads of households and as such they not only control resources but also access to and utilization of the resources.

Men not only comprise the largest number in leadership positions globally but also in our communities. They are the Kings, clan leaders, elders among others. Because of this, men are the main decision makers in homes, communities and the nation.

Most importantly men listen to their fellow men and take advice from them.

If we are to end AIDS in Uganda by 2030, we need to engage with men to motivate them to test, enroll on treatment for those who are HIV positive and most importantly to adhere to treatment. This will help them to achieve viral suppression.

I call upon Men, especially leaders to engage fellow men to address cultural norms and practices that are harmful and predispose young women and adolescent girls to HIV infection such as early marriage.

It is only then that we will achieve our goal of Ending AIDS as a public health threat in Uganda by 2030. 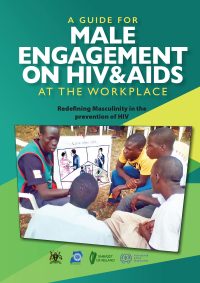