Over the last year, Sonke’s work globally but especially in Africa, through the MenEngage Alliance, has grown significantly, and we are working closely with many organisations in the region to engage men and boys on issues of gender and HIV. The policy environments in the numerous countries where Alliance members are based vary enormously and this has a profound impact on the priorities and types of interventions which they adopt. Understanding these policies is an essential element of activism and development work, and so Sonke was very excited when we were engaged to conduct two policy scans across a number of countries. The first scan, completed in November 2010, looks at HIV and AIDS National Strategic Plans, while the second, which is still underway, examines the gender-based violence, educational, sexual and reproductive health, LGBTI, and parenting policies in a number of African countries. 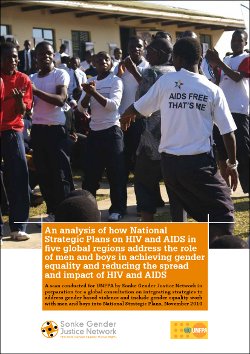 The scan of HIV and AIDS National Strategic Plans (NSPs), commissioned by UNFPA, was conducted across 16 countries in five regions, namely South Africa, Rwanda, Kenya, Liberia, Sudan, Cote D’Ivoire, Cambodia, India, Pakistan, Papua New Guinea, Haiti, Jamaica, Ukraine, Serbia, Nicaragua and Brazil.
Sonke assessed the NSPs in terms of their engagement with key issues of gender equality, and especially the degree to which men and boys are incorporated within this engagement. As such, the NSPs were analysed to assess:

Counselling and Testing (VCT), and support their partners to access VCT and treatment; addresses the need to for men to become involved in Prevention of Mother-to-Child Transmission (PMTCT) processes; addresses the needs of marginalised men and boys; commits to work which will increase men’s involvement in the care economy; and engage men in the prevention of gender-based violence.

The analysis of these 16 NSPs revealed that most of the countries do acknowledge the importance of a gender perspective within HIV and AIDS work and many commit to mainstreaming gender across all areas of their HIV and AIDS work. However, the majority of the NSPs focus their prevention strategies on how best to reach women and youth, while men often go unmentioned; when gender is referred to, it often does not include men.

While a few of the NSPs acknowledge the harmful effects of certain gender norms, very little is proposed in the way of detailed strategies to specifically challenge or attempt to transform them. For many of the NSPs, it is clear that gender is almost synonymous with women, and in the process neglect an important opportunity to engage men and boys to reduce their own and women’s vulnerabilities to HIV and AIDS.

Notably, a small number of countries, including Kenya, Rwanda and South Africa, have made important steps towards including men and boys, predominantly in the area of condom distribution, PMTCT, Medical Male Circumcision and the needs of marginalised men. While these steps are encouraging and commendable, much remains to be done.

The supportive role that men can play in women’s lives; the importance of addressing negative masculine norms; and the need to increase men’s uptake of HIV services are generally ignored by the majority of the NSPs. However, an important start has been made, and increased dialogue and collaboration on such issues must be encouraged in order for work to progress in a constructive and positive direction.

The findings of the policy scan were presented and discussed at a meeting held in Nairobi late last year, entitled Integrating programming to address gender-based violence and engage men and boys to challenge gender inequality in national AIDS strategies and plans.

The meeting was jointly hosted by UNAIDS, UNDP, UNFPA, UNIFEM, WHO and the MenEngage Alliance represented by Sonke, the International Centre for Research on Women (ICRW) and the Athena Network, including Salamander Trust in close collaboration with the UN Interagency Working Group on women, girls, gender equality and HIV. The various countries represented at the meeting broke away into country and regional groupings to assess their NSPs and plan the way forward with regard to integrating GBV and work with men and boys into their NSPs. The next steps for each country were plotted, and the United Nations committed to assisting countries in specific ways.

The scan will search for language that is gender transformative and seeks to positively engage men and boys. Sonke will analyse notable patterns, identify gaps in policies, and make recommendations for future policy advocacy in a report expected to be published in 2011. Sonke and MenEngage Alliance will also produce six country-specific policy briefs that provide more layered context and findings. The MenEngage Steering Committee will work with UNDP to choose the six countries best suited for these in-depth briefs.

These policy scans represent an important progression in Sonke’s regional work. The Spectrum of Change theory upon which much of Sonke’s work is premised promotes the view that social change can only be achieved through a multi-pronged approach that targets individuals, communities, media and government and places emphasis on networking and capacity building of organisations working in the field. Policy plays an enormous role and it is essential that country and regional policies and laws reflect a positive approach which explicitly acknowledges that direct with men and boys is essential for sustained gender transformation and for the prevention of HIV. A better understanding of the policies will enable us and our MenEngage partners to better address the issues specific to the countries in which we are active.

Advancing the WPS Agenda In Africa Through Knowledge Sharing